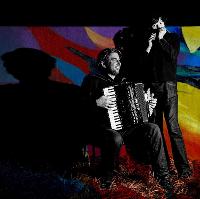 Will Pound & Eddy Jay at The Convent

This event has already happened!
This event occurred in April 2016. If you're looking for a upcoming event, try the links below:
View more events.
Tweet

Lineup and Details for Will Pound & Eddy Jay

This show is an album launch for their debut album 'Ignite!'

Will Pound is one of the finest harmonica players of his generation whose innovative style pushes the boundaries of his instrument and the folk genre. Three-time nominee for BBC Radio 2 Folk Musician Of The Year, he has held the accolades of FATEA Instrumentalist of the Year (2013, 2014) and Spiral Earth Magazine Musician Of The Year (2015). Famous for his inventive arrangements and outstanding solos in duos Haddo, Walsh and Pound and four-piece The Will Pound Band, Will has performed with musicians as diverse as Martin Simpson, Concerto Caledonia, Michelle Burke and Guy Chambers.

Eddy Jay is a real master of the accordion with the ability to turn it into an orchestra at his fingertips. A key player in the arrangement of the hit stage musical version of Noel Coward’s ‘Brief Encounter’ (Kneehigh theatre) which toured US theatres including Studio 56 on Broadway and former member of Newfolks with Oliver Wilson-Dickson, Mabon, he is eclectic in both his performance and arrangements. He has performed with Cathal Coughlan and Tina May, devised his own version of Prokofiev’s classic ‘Peter and the Wolf’ and Edith Piaf tribute show which have toured the UK and beyond.