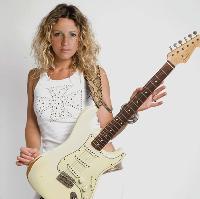 Ana Popovic at The Convent

This event has already happened!
This event occurred in January 2017. If you're looking for a upcoming event, try the links below:
View more events.
Tweet

Lineup and Details for Ana Popovic

L.A. based, guitar-player and singer ANA POPOVIC is back on the road promoting her new triple album TRILOGY - Her most ambitious project yet.

The only female guitarist part of the ‘all-star’ Experience Hendrix 2014 - ’17 line-up about the release: 'In an era where most are skeptic about the current state and future of the music industry, I wanted TRILOGY to tell a different story. The record biz might be broken and Spotify might rip us off, but that can’t keep an artist down. Creativity is very much alive, and music is the celebration of life.'

Ana was born in Belgrade, Serbia (formerly Yugoslavia) and grew up in a family where music was very important. All throughout her youth, her father would invite friends over for nightly jam sessions. In this atmosphere, she quickly learned her father’s impressive blues and soul record collection, grabbed his guitar and started playing at the age of fifteen. Since then, Ana has developed into an phenomenal guitarist/vocalist with a growing legion of fans throughout the world.

Ana and her powerful band are tirelessly touring, playing major blues, jazz and rock festivals. She is endorsed by Fender, D'Angelico, Jim Dunlop and DR strings. Ana has shared headlining stages with B.B. King, Joe Bonamassa, Gary Clark Jr. and many others. She’s nominated for five Blues Music Awards, appeared on the cover of Vintage Guitar and Guitar Player magazine. Her albums Can You Stand The Heat (2013) and Unconditional (2011) where Pick-Of-The-Week by USA Today and featured on NPR Music. Nearly all of Ana's albums made it the Top 5 of the Billboard Blues Charts and are being played regularly on US radio.

“Ana Popovic is one helluva a guitar-player.”
- Bruce Springsteen